Bringing the Crisis of Homelessness to John Tory’s Door-Step

Is OCAP Really Being ‘Unfair?’ 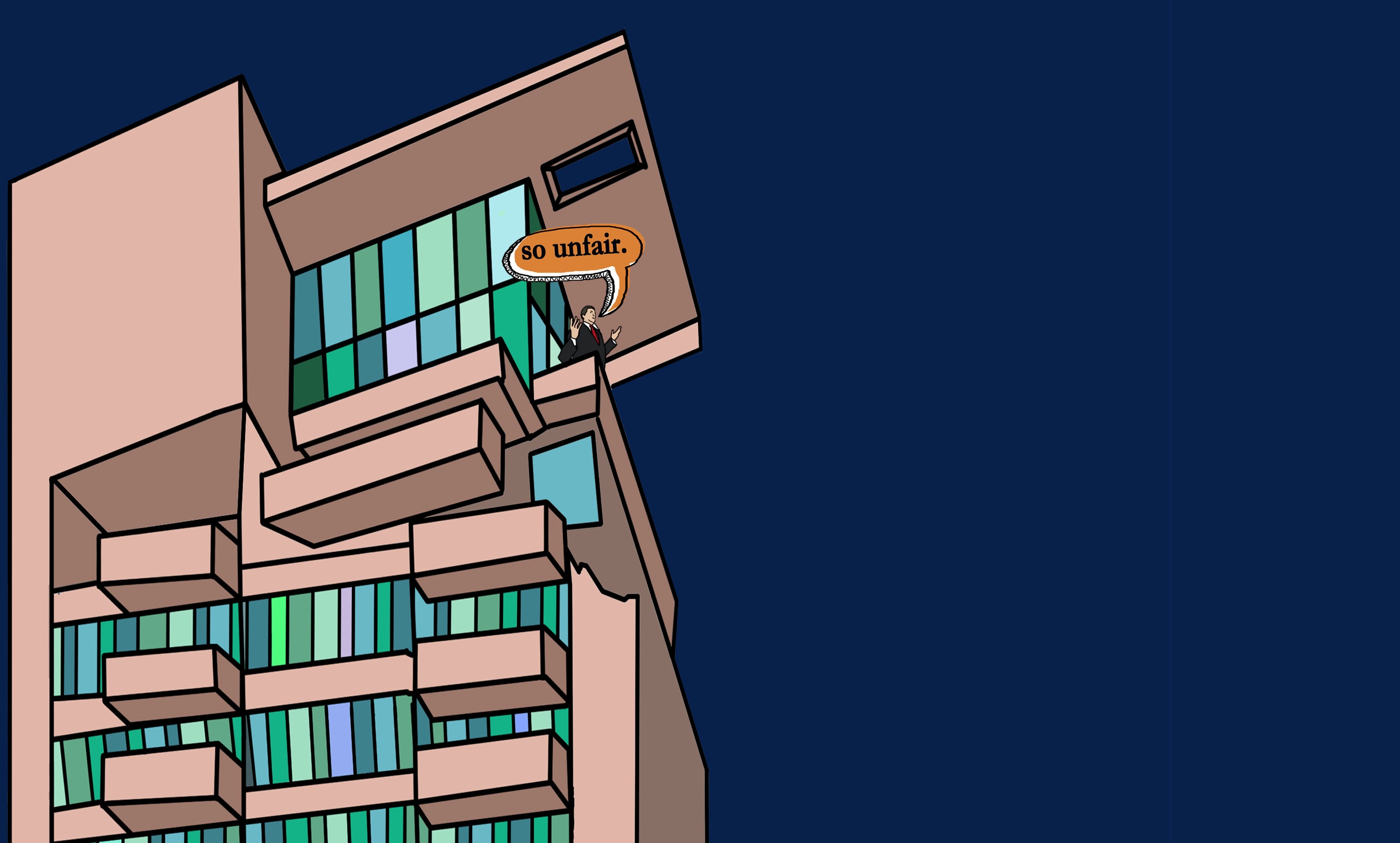 On Saturday, April 22, at 7.00PM, OCAP will be back in front of Mayor John Tory’s luxury condo at Bloor and Bedford to challenge the homeless crisis in Toronto. This time, we will bed down and stay for the night. Tory has previously accused us of being ‘unfair’ by bringing the fight to his private residence. At least two City Council members have taken the same position publicly. Sections of the media have been aghast that we would behave in this way. This being so, we wanted to put the following points on the record.

We will be bedding down in front of John Tory’s condo on April 22 and we make no apologies for our actions. In this wealthy City, the fact that people lack even shelter space, is a shame and a disgrace and we intend to challenge that even in the face of high placed disapproval.

Speakers Series: The Trouble with the Housing Bubble

Join us for our monthly speakers series focusing on topics central to poor people’s issues and organizing. A new topic is presented every month and all events are open to the public. Come on out, invite your friends and please share widely!

April’s topic is: The Trouble with the Housing Bubble

– What are the reasons behind the current housing crisis?

– How are people fighting evictions and exploitative landlords?

– What are our rights as tenants?

Join us for a conversation over good food as we strategize around these and other questions to build the fight for public and affordable housing.

Gideon is a PhD candidate in political science at York University, where he studies the political economy of capitalism, socioeconomic inequality, and housing.

Kelly is a long-time housing activist and tenant-rights organizer.

by AJ Withers and John Clarke

Disabled people in Ontario are much more likely to experience poverty than non-disabled people. Many have to live on sub poverty payments under the Ontario Disability Support Program (ODSP) or the even more wretched income provided by Ontario Works (OW). Those that are in this situation are confronted by an ongoing process of surveillance, invasion of their privacy and moral policing. Those disabled people who are working, because of systemic discrimination, are less likely to be receiving living wages and are far more likely to be precariously employed. As anti poverty organizers, we fully understand the anger and desperation that such a situation generates.

On this basis, it is easy to see how, at first glance, there are aspects of a Basic Income (BI) approach that could be found attractive by disabled people. The promise of a somewhat higher payment, provided without the kind of intrusive element that presently exists, would seem to represent a step forward. However, we think it’s important to ask why the Liberal Government would suddenly support a new approach that would mean considerably increased costs. Why would a Government that has driven down the adequacy of benefit rates and cut programs for disabled people want to reverse course so dramatically? BI can look very alluring but we are convinced that, In reality, it will mean a degrading of the already inadequate ‘social safety net’ that will make things dramatically worse for disabled people. END_OF_DOCUMENT_TOKEN_TO_BE_REPLACED

Basic Income: A Way Forward for the Left?

The idea of a Universal Basic Income (UBI) has been championed by both progressives and conservatives. Not everyone on the left, however, is behind the idea. Is the UBI a means of redistributing wealth, attacking poverty and protecting workers from technological displacement? Or will basic income serve to advance an agenda of austerity and privatization?

Join us on April 13th as we begin to debate these important questions. The debate will feature two speakers speaking in favour of the left support for Basic Income and two against.

***
In the spirit of The Leap Manifesto’s call for ‘vigorous debate about the introduction of a universal basic income,’ this interactive event is for anyone trying to figure out whether basic income should be a priority demand for progressives.

Update: Read our article in the Now Magazine documenting how the city siphoned millions of dollars away from homelessness and homelessness prevention programs during this time of crisis.

It has been a terrible winter for Toronto’s homeless.  The shelters have seen appalling levels of overcrowding and even the warming centres and drop ins have been hard pressed to deal with the numbers seeking a place of refuge.  The overcrowding has caused four deaths and homeless people have been hospitalized with hypothermia.

Throughout these dreadful months, Mayor John Tory and the bureaucrats at City Hall have refused to open additional space. Now, the warming centres and volunteer-run ‘Out of the Cold’ facilities will be closing for the year. There will be even fewer options available to people trying to survive on streets. The City must open enough new spaces immediately to ensure that the policy of not running the shelters above 90% occupancy is actually in effect. They must ensure that enough low barrier and harm reduction spaces are available so that people can actually access the shelter system.
At this critical time, we are going back to John Tory’s multi-million condo home for a sleep out to drive home the need for shelters for the homeless in a City that drips with wealth. We will set up at 7.00 with a meal, speakers and entertainment. Come out and stay for as long as you can to help us win the right to shelter for those Tory and his friends are abandoning to the streets

What to bring: If you can, bring blankets, sleeping bags, and other things to keep yourself warm through the night. We’ll have sleeping bags with us for those who don’t have them. There will also be warm drinks and snacks throughout the night.

Speakers Series: Fighting Back in the Age of Trump

*****
Join us for our monthly speakers series focusing on topics central to poor people’s issues and organizing. A new topic is presented every month and all events are open to the public. Come on out, invite your friends and please share widely!

This month’s topic is: Fighting Back in the Age of Trump
– What does the Trump victory mean for poor people’s struggles here?
– How can he be defeated?
– If Trump is our enemy, is Trudeau our friend?

Join us for a conversation over good food as we strategize around these and other questions to build a movement of capable of stifling the rise of Trump and all that his ilk stand for.

Zabia is community organizer in the Thorncliffe Park neighbourhood and PhD student at York University.

John is organizer at the OCAP.

Last week, a twenty eight year old homeless indigenous man perished in Toronto, after staff at a drop in had to tell him that the facility was too overwhelmed to provide a place of shelter for the night.

For months, homeless people, advocates and service providers have been telling Mayor John Tory that the shelter system is hopelessly overcrowded and that a death was all but inevitable. We were so sure of this horrible reality in OCAP that we had a contingency plan to hold a memorial at Tory’s luxury condo in the event of a death. Last Sunday, we had to do just that.

Unbelievably, the response of the Mayor’s office to the tragedy has been to double down on the evasions. Rather than to open the federal armouries or some equivalent location, as the community had demanded, to try and save lives, Tory and his entourage have ducked and weaved to try and deflect the blame they can’t escape.

END_OF_DOCUMENT_TOKEN_TO_BE_REPLACED

Is the Mayor of Toronto visiting your community? Call the John Tory Tip Line!

Last week, a homeless man died after an overwhelmed drop-in was not even able to offer him a mat on the floor. The place was so crowded that nine others could not be taken in that night.

Toronto’s shelter system is bursting at the seams and homeless people and their allies having been telling that to Mayor John Tory for months. He was warned that the level of overcrowding was life threatening and urged to open up the federal armouries to take the pressure off the system. He failed to act and a human life was lost. The lives of many others are at risk.

Despite this grim situation, the Mayor is still not taking the emergency action that is needed. Last weekend, we held a memorial for the man who died at Tory’s luxury condo. He didn’t like that much and he wasn’t supposed to. We want to increase the pressure and force him to open space.

We intend to confront John Tory as he goes about his round of Mayoral events, cutting ribbons and kissing babies. If he is coming to your community or you learn of a function he will be attending, please call OCAP at (416) 925-6939 or email us at ocap@tao.ca

Thanks for any and all tips and information.